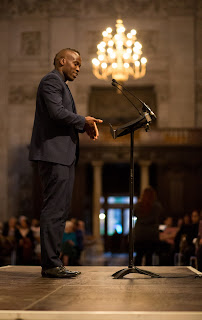 In recent days we have become aware of the pervasive presence of racism in our own hearts, our church and society. I asked Denis Adide, one of the younger clergy in the Kensington Area to offer a Guest Blog piece reflecting on his experience.

Perhaps it was the collective awareness of our mortality brought about by the global pandemic. The world was made sensitive to the simplicity of life’s light and how easy it is to extinguish. The numbers of those lost to Covid-19 being read out in the daily briefings starkly reminding us all of just how vulnerable we each are.

Perhaps, in addition, the stripping away of all the normal distractions gave some of us - for the first time - a long sight of the mirror. We were forced to confront who we were - apart from the normal ‘what we do for a living’ answer.

Perhaps, the recently developed culture/habit of long, YouTube and TikTok spirals with videos linked to videos meant that the sight of something ‘viral’ was inevitable.

Whatever the case, it seems the world was forced to be still for those long eight minutes and forty six seconds. Twisted between the knowledge that this man was losing his life, and the illusory hope that someone - anyone - might intervene.

By all accounts the sight was shocking. A man pleaded for breath, another knelt on his neck - hands firmly in his pockets, as firm as the scowl he presents the watching crowd. A young girl films the scene on her smart phone, a few passers-by intercede for a reprieve while the very ones sworn to save life, take it: they do so in a torturous and lengthy way. It is hard to watch but something inside us compelled us to.

For many the world presented by this scene was foreign. Like new borns, they awoke and for the first time drew breath and felt the cold. Like the road to Damascus, the dazzling light recalibrating their eyes with the realisation that they couldn’t see what was always in plain sight.


For others, like myself, this was the world we awoke to at birth. This pain - watching a lynching - wasn’t new but recurring. We knew the terror of entering rooms which bore the threat of being made to feel like the lesser ‘other’. We knew the ears that disregarded our pleas for dignity, utilising the power available - in ways both subtle and obvious - to dismiss our laments. We knew the frustration of having our prophetic utterances - calling out the wickedness we could see and were enduring - dismissed as ‘irrational’ or ‘angry’. We knew the inner shake of watching - as I did - and old black man rising from his seat on the crowded bus so that the middle aged white woman would sit. She took the seat without batting an eye or a second thought, or a thank you. We knew the threat of being stopped and searched for ‘resembling’ the ‘suspect’, or driving a car that was ‘beyond your station’, or not possibly living in ‘that’ neighbourhood.

I knew the pain of preaching in a prison full of people who look like me; of looking at the statistics and seeing the truth I knew before checking - that there was a clear disparity along ethnicity lines. I knew the indignity of being asked to remove my coat in a shop because the shopkeeper and his wife were convinced I had stolen something. Convinced of my guilt none of the folks in the queue behind me objected or intervened. I had to return to theological college and somehow carry on with my day. I knew the pain of seeing depicted in the news an idea of what it meant to be a black man that was deeply false - seeing the disparity between the representations of black and white men across all media.

We, I, have been marked out to be the exotic, dangerous, desirable, ‘other’. A body to be displayed at times - show casing the ‘white authority figure’s’ philanthropy. An appearance to be freely commented upon; hair to be touched; identity to be questioned. With our sovereignty of flesh, mind, and will constantly suffering violence it’s no surprise that the private divinity of death isn’t afforded us: the black man’s last breath was broadcast. I know the sorrow of watching folk react to the spectacle, claim to desire change, then search for the next spectacle. I know the pain of watching my white colleagues gloss over the killings of unarmed black men, buying ‘necessity’ as a just cause.

The ill treatment of the Windrush generation and their families is still ongoing. I still have monkey noises made at me. I still have to justify my cry for equality, equity, and dignity. I still have to call on twice as much grace to forgive the daily assaults from those that surround me.

My country doesn’t teach it’s own history and has a ‘special relationship’ with the country where a young woman who resembles my own sister was shot and killed in her own home by a police officer: no one has been held to account for this as yet. My country now wishes to leverage aid to the very places for which it bears responsibility for buried bones. In truth, my country’s idea of its own citizen’s face, doesn’t include mine.

My Church… my church. At best, woefully blind, and at worst wilfully complicit has its own hands drenched in the same blood. Binding its course to the rest of the world’s instead of heaven’s, this bride built her house with the same blue-prints as society, and has etched in all its windows the images that make me that ‘other’: the dragon that George slays. With crucial pages of history stuck together, generations ignored the mirrors that the scriptures held up. In thought, word, and deed; through negligence, weakness, and deliberate choices her face now resembles the world and not its groom.

When we checked, no one had stood up and spoken for us. No one had taken up our case. In its corridors we are happened upon by bandits who with their words and deeds steal our dignity. Though I have had champions along the way, my story is one with those who’ve had to endure discrimination in its many forms in the isles, pews, church offices, assessment rooms and meetings. Her hands are not clean.

I heard from the streets these past weeks - while the church was silent - the prophetic voice that should have been hers. And when she eventually did speak, it was a familiar song. For my life-time, the truth of its institutional racism has been known. In my life-time no substantial change has been made. Confession and penance divorced at the altar, words ever flowed but actions never followed. And the bitterness I feel and I seek God’s face in order to endure, is also echoed in the voices of my contemporaries and forebears. We lament on the margins with no refuge on the earth.

The murder of George Floyd was a painful thing to watch. But the world that made - and still makes - such a thing possible prevails. This death, at the hands of an old and firmly established tyranny, adds one more black body to the vast cloud of witnesses: unwilling martyrs. We who survive do so in a life restrained, unable to fully become for the weight we bare until change happens or the judge takes his seat.

The freshly opened eyes of the world and its ‘new found’ voice now pose a challenge. Will this new swell of ‘outrage’, ‘protest’ and ‘confession’ bring about a change to the world I’ve lived in: to the church I’m called to serve in? Can I dare dream that the day will come when my armour and first aid kit won’t need repair and replenishing? There have been waves like these, will this be different?

Hope is such a hard thing for a wounded realist to hold onto.

They will know of the one who struggled to draw breath for hours on a tree; the same one who was with God in the beginning. They will know that, despite what the world and the church (if no change happens) might say, they are fearfully and wonderfully made - chosen before the foundations of the world. They will know that in the colour of their skin is the inheritance of an un-suppressable human spirit - forged in fire and chains and forever rising. They will know that their place is alongside Christ, proclaiming the wickedness of the times while enduring so that they might reign with him. Hopefully, with no scales in their eyes they might survive, and maybe even thrive in this nightmare.

Popular posts from this blog

The Stark Choice that COVID sets before us 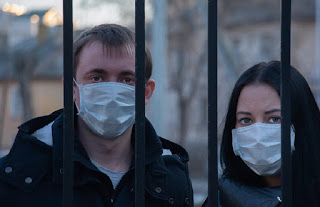 In the old days they would have seen this as a judgment. With a global death toll that has now passed 1 million, this plague would have been interpreted by our forebears as divine punishment or a sign of the end times. Not many people are seeing it that way these days, but maybe our elders had a point. The Greek word for judgment is Krisis – crisis. The great book of judgment in the Bible is called the Apocalypse – the book of Revelation. Judgment was not only seen as punishment, but more as a moment of crisis, a revelation of where we are heading, impressing the stakes of a crucial decision upon us. At the start of lockdown, in towns, villages and cities across the country, people of all faiths and none volunteered time and money, neighbours knocked on the door of elderly people to offer to do their shopping, family members arranged Zoom calls to keep up the spirits of isolated relatives. One of the churches in my patch began to think about how to respond to the needs that were quickl
Read more

The End of the Pew? 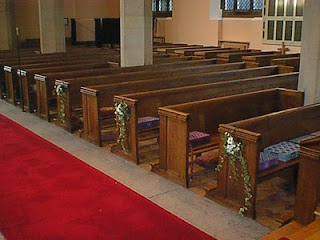 What is the biggest obstacle to the growth of the church in Britain today? Creeping secularisation? Richard Dawkins? Infighting over women bishops or gay clergy? Let me make another suggestion: how about the continued existence of pews? For the first 1500 years of the church’s life, pews were extremely rare. In most medieval churches people stood or sat on the floor, with only a narrow bench around the edge of the building for seating. Eastern Orthodox churches never got around to having pews – still today in Russia and Greece, worshippers stand. When they did gradually get introduced, pews were a mixed blessing. They were intimately connected with social division and hierarchy, with pews ranked according to social standing. The rich would have large grand stalls at the front and woe betide anyone who sat in the wrong one. They were exclusive then, and they are exclusive now. Pews today effectively exclude the 90% of people who are not regular attenders of services. The problem i
Read more

Graham Tomlin
London, United Kingdom
I am Bishop of Kensington in London, and President of St Mellitus College, a husband, father, grandfather, theologian, and fan of the mighty Bristol City (and Man United who used to cheer me up when City lost)